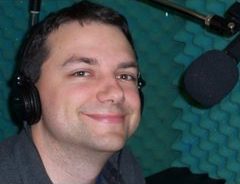 Since the age of 17, Maryland-based keyboardist and guitarist Mark Ashby has been writing and releasing his original instrumental compositions, taking diverse influences from krautrock to British progressive to pounding industrial music and fusing them into a unique style that is quickly becoming easily identifiable.

The year 1990 saw Ashby compile his first cassette release, Eos, a concept album detailing a fictional scenario of nuclear conflict and the rebirth of the world told entirely through instrumental music. Later that year, Ashby collaborated with Florida keyboardist Joel Ainsworth as the group Double Vision to produce the cassette Thirty Miles from Home. In 1991, the duo became a quartet, adding guitarist Joel Burley and percussionist/flutist Christie Hotchkiss for the Second Sighting cassette, a more eclectic and rock-oriented follow-up to Thirty Miles. The group disbanded shortly afterward, prompting Ashby to continue composing solo music. His 1992 cassette Lexicon received critical praise from several publications, particularly for the side-length tour de force "Infrared," which combined the synthesizer soundscapes with sampled voices to depict the invisible communication – both positive and negative – between human beings and within each of us. Exploring the inner world of emotions further, Ashby put together the seven-track cassette Xenophobia in 1993, most of the songs dealing with issues of trust and intrapersonal turmoil. His final solo cassette release, Independent Thoughts (1994), contained unused tracks from the previous three years as well as new compositions.

The final track on Xenophobia – "Beyond the Window" – served as a jumping-off point for the concept album that became The Mirror Shattered, the project that brought Burley and Hotchkiss (now married to each other) back into Ashby’s circle of collaborators as the group The Distance. Using albums like Pete Townshend’s PsychoDerelict and Roger Waters’s Radio KAOS as influences, Ashby wrote the story that began with the poem featured in "Beyond the Window," now lengthened to tell the story of Kevin, an artist struggling with the demons of heroin addiction and lost love. Although reluctant to trust anyone else after being hurt so deeply, Kevin learns through a kind co-worker and a hearing-impaired ten-year-old how to help himself and both give and receive friendship. "I like to call The Mirror Shattered a movie without the visuals," Ashby has said. "Sort of like the radio plays of the pre-television era. You hear the story, and you become wrapped up in it through its characters and the music that accompanies it. No pictures are necessary." Recorded in 1995, The Mirror Shattered was released on CD through Horizon Music in 1996. The alternating dark and energetic moments in both music and voice-overs earned Mirror favorable reception from press and radio outlets, drawing comparisons to mid-period Tangerine Dream, Vangelis, and The Wall-era Pink Floyd.

For his next project, once again solo, Ashby would realize a goal of his by scoring the independent film Dance of Shadows in 1997, with the CD released the following year, also on Horizon. The action film required an action-packed soundtrack, which Ashby provided by adding the likes of prog rockers King Crimson and goth mainstays Skinny Puppy to the mix of influences. While songs like "Sable’s Theme" and "The Rescuer" feel almost inspirational and uplifting in tone, others like "Function 12" and the tongue-in-cheek-named "Gratuitous Sex and Violence" (containing sound samples and outtakes from the filming) drive hard and sound more like rock songs than something born from electronica. Although some tracks appear on the CD exactly as they do in the film Dance of Shadows and its shorter prequel Nobody Rides Forever, Ashby stretched and rearranged most songs from their one-to-two-minute original lengths to four-to-five-minute tracks more suited to the album format, allowing the songs to stand on their own apart from the settings of the film. The album’s songs have appeared on radio stations both in the United States and in Europe, even as far away as Romania.

While currently at work on more projects, including another Distance album tentatively entitled Martyr, Ashby helped remaster and release a project from 1995 called The Gate with Polish keyboardist/composer Jacek Spruch on Spruch’s Underwater Music label. Going by the group name ESP, Ashby and Spruch initially worked together in the mid-‘90s on the track "Connections" on Ashby’s solo cassette Independent Thoughts, soon moving on to a more ambitious transcontinental collaboration that became these four tracks. However, the tapes remained in the vault until early 2001. Nods to Tangerine Dream, Klaus Schulze, and John Dyson are apparent throughout the work, especially on the 18-minute "Deus ex Machina" and the 22-minute, six-part epic "Transcendence." More information on The Gate and other Underwater Music projects is available at http://underwatermusic.republika.pl.