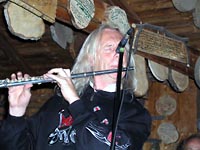 A native of Britain, Steve Jolliffe has been an active keyboardist, flutist and saxophonist for over 35 years. His career started in 1967, when he met Rick Davies and formed a group called The Joint, which, after Steve left, evolved into Supertramp. Jolliffe's interest in classical music led him to the "Berlin High School for Music" in 1969. He was the first student accepted there who didn't have the ability to read music. And while at the school, he met Edgar Froese, and together with Klaus Schulze toured Germany as one of the earliest incarnations of Tangerine Dream.

That stint lasted nearly a year, and then Steve left Tangerine Dream and returned to England. There he joined a blues/rock band called Steamhammer, and toured Europe with them for the next several years. In 1973 Jolliffe left that group and scored several films, including the award-winning documentary Tatoo.

Steve rejoined Tangerine Dream in 1978 and with Froese, Chris Franke and Klaus Krüger, recorded the album Cyclone. To this day, Cyclone remains a controversial album amongst TD aficionados, mostly due to Steve's vocals and lyrics. The quartet toured Europe that year and played to crowds of up to 100,000. Shortly afterward, Jolliffe left TD for the second time and went back to England to pursue a solo career.

He recorded several albums in the 1980s. Two of them, Journeys out of the Body and Beyond the Dream, are available through Horizon Music. Journeys, a 1982 release, featured a collaboration with the late guitarist Tony Duhig, formerly of Jade Warrior. Two years later, Steve issued Beyond the Dream, which once again featured lyrics and vocals. He also collaborated with Klaus Schulze on a Wahnfried album called Miditation. Jolliffe spent the rest of the decade recording library discs, which are meant to be used in films at will and not intended to be sold to the general public.

In 1990 Steve moved to America and released the album Escape the following year. During this time Jolliffe partnered with Horizon Music to distribute many of his CD's and, after releasing Warrior in 1992, became Horizon's first signee. He moved back to England in 1994 and released Alien, which was less electronic than previous efforts and featured extensive use of flute and saxophone. Then Steve explored a new musical direction with the ambient/trance CD Zanzi. He took this title from a French game of chance, and the disc was chosen by the nationally syndicated radio program Musical Starstreams as one of its Top Ten albums of 1996. Jolliffe also found the time to work with Eat Static members Merv Pepler and Joie Hinton (formerly of Ozric Tentacles) on their album Science of the Gods. After that, he released Omni, a logical follow-up to Zanzi.

1999 saw Steve release a CD called Deep Down Far. Like much of his varied work, this disc draws on elements of traditional electronic, ambient and classical music structures. The opening track has been used in advertisements on the Discovery Channel in England. A year later, Jolliffe put out a compilation CD called Invitation, which features music from each of the aforementioned albums. Jump ahead to 2003, and Steve releases a CD entitled Space. This album has a stronger accent on the classical than most of his recent work. A couple of tracks may remind some listeners of Philip Glass' music.

Steve Jolliffe still lives in England and continues to collaborate occasionally with Pepler and Hinton.

"Steve's work is quite unique. It is a bit 'story-telling', with movements and stark, well-defined colors. Rich and very personal. You can feel his passion as he plays the instruments, on the edge or balance, but solid as a rock." -- Andre Lefebvre, Radio announcer, www.soulcanvas.com/waves